Raising the Bar: What is Normal Hearing? 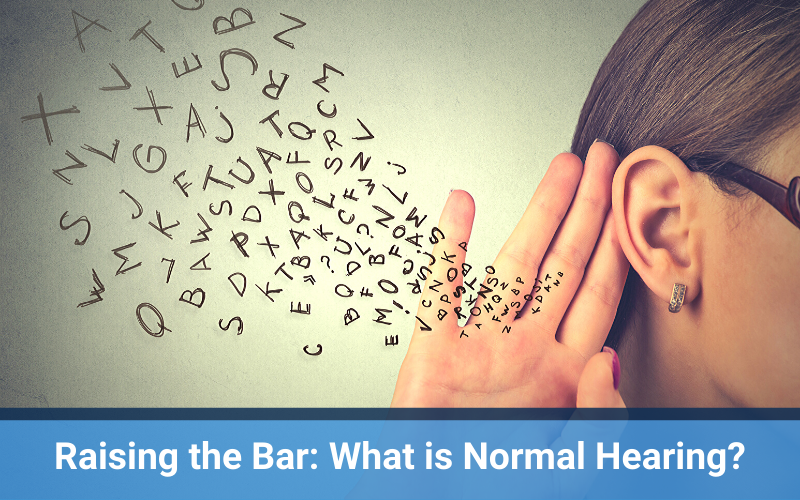 Normal hearing sensitivity has been defined as being able to hear a range of frequencies at a loudness between 0-25 decibels. Logical thinking says that if your hearing is in this range your ability to understand speech would require little effort in higher areas of the brain. New research is questioning this.

In a study by eNeuro, they monitored the brain activity of adults aged 18-41 years while they listened to spoken sentences and answered a series of questions in relation to these sentences.

The sentences used were varied in their complexity (the level of syntactic processing demands - which is the order and arrangement of words in the sentences provided).

The purpose of this study was to investigate how a person with ‘normal hearing’ and speech comprehension processed spoken sentences and to see if these adults who believe they have ‘normal hearing’ have actually developed some form of hearing loss.

For the study, there were 35 active participants ranging from ages 18 to 41.

All group members were native speakers of American English and none of them were aware of any history of any neurologic disorders and all reported normal hearing.

Audiometric testing determined that all participant’s hearing fell within the range that is considered clinically ‘normal’ which is 0-25dB.

There were 24 base sentences created for this procedure and each sentence included a male or a female character who was doing an action. The action involved a recipient and the job of the participant was to figure out which character in the sentence was doing the action.

For example, one of the sentences posed was:

“Kings that appreciate queens with three black horses are good.”

They were asked to find the character who was performing an action in the above sentence and answer what it’s gender was. In the case of this sentence, the actor is the king and the answer is male.

The participants entered their answers by quickly and accurately clicking a button that corresponded with their answers.

Despite the accuracy being quite high, there were still some errors made by participants throughout the test. These mistakes corresponded with increased activity in the area of the brain responsible for attention and accuracy.

The effort needed to hear and process speech is much greater with a loss of hearing sensitivity because it pulls resources from other areas of the brain that are not typically used for hearing.

Researchers discovered the activity in the part of the brain responsible for attention changed depending on the individual’s hearing ability.

The participants with poorer hearing (which was still considered normal) were showing a greater amount of activity in this area of the brain when they successfully understood a sentence. This was because they were using it to pay attention and keep focused on what was being said.

The results of this study suggest that even the slightest variation in the ability to hear can have a significant impact on the areas of the brain that are supporting auditory speech and sentence comprehension.

Meaning, even with what we consider normal hearing a loss of hearing sensitivity can cause the individual to put more strain on the area of their brain used for breaking down a sentence and understanding the meaning behind it. This leads to increased effort and pulls resources from other areas of the brain.

This research may lead us to more sensitive ways of measuring hearing.

If you think you’re suffering from a hearing problem or feel your hearing is impaired in any way then schedule an appointment by calling us at (916) 646-2471. We also offer Phone and Telehealth consultations.

Everything You Need to Know About Medicare Advantage and Hearing Aids
How Does Hearing Loss Affect Relationships?
How To Manage Tinnitus
Tinnitus: Understanding Ringing In Your Ear
Introducing Our New Partner... Dr. Kirsten McWilliams!

My uncle raved about his good audiologist before I recently moved to CA, or needed hearing aides. Then I moved to Ca and needed to find an audiologist who would help me get used to managing my new Widex hearing aides, especially since I was having a problem with one of them. Julia and her staff are so welcoming. The office is beautiful and feels relaxing like a spa. Staff takes time to genuinely interact with all clients. Julia’s expertise is clear in her explanation of procedures and care. I now join my uncle in raving about Julia as my audiologist!